On May 18th, a group of 27 World Maritime University students from 23 countries around the world visited Sanwa Dock.
The World Maritime University (WMU) is a postgraduate university established in Sweden in 1983 by the International Maritime Organization (IMO), a specialized agency of the United Nations that regulates shipping. The university provides an advanced program in maritime studies primarily for maritime affairs officials from developing countries.
Japanese maritime affairs associations such as the Nippon Foundation and the Sasakawa Peace Foundation began to sponsor a fellowship program for WMU students in 1987. As part of the program, each year the fellows are invited to Japan to deepen their understanding of Japan’s maritime society.
Given Sanwa Dock’s relationship with the Nippon Foundation (the company has received financing from the foundation for capital investments), Sanwa Dock used this occasion to give the fellows an opportunity to learn about the company as well as the history and current state of the Japanese ship repair industry as part of their study trip in Japan.
Following President & CEO Isamu Teranishi’s opening address, Director Shuta Teranishi gave a talk entitled “Japanese Ship Repair Industry and Sanwa Dock”. Then, the fellows went on a tour of the grounds. Finally, there was a Q&A session.
Henceforth, Sanwa Dock will continue to be involved in activities that contribute to the development of an international maritime society. 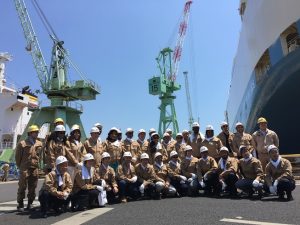 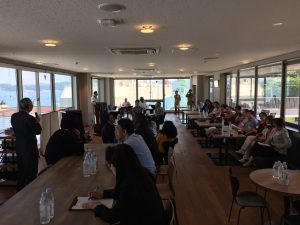 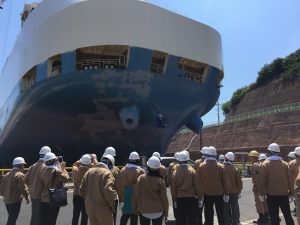 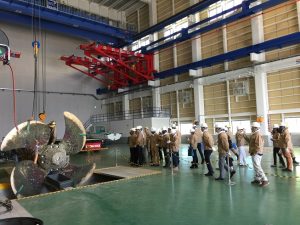