Ceremony Held for Completion of New Dock, Factory, and HQ

On April 14, Sanwa Dock held a ceremony at the head office in Innoshima for the completion of a new dock, factory, and headquarters.
The company celebrated the completion of the No. 7 Dock (220m x 45m; completed May 2016), new headquarters (6 floors: B1F~5F; total floor space: about 3,225m2; completed July 2016), and the East Factory (consisting of Pipe Shop, Material Warehouse, and No. 3 Finishing Shop; total floor space: about 4,479m2; completed March 2017). In all 70 guests were invited to attend the event.
First, the priest and maiden of Innoshima’s Oyama Shrine performed Shinto rituals inside the East Factory. Then, a banquet was held on the 4th floor of the company’s headquarters.
Sanwa Dock has moved forward with its business expansion plan for about the past 10 years in order to further increase its capacity for repairing larger coastal vessels and to be able to handle the Ballast Water Management Convention, which is set to go into effect in September 2017.
With its gratitude, Sanwa Dock invited those that assisted and advised the company in moving forward with its business expansion plan to attend its small banquet. The honored guests included: Mr. Yuko Hiratani, the Mayor of Onomichi; Mr. Masato Miyanaga, the President of Chugoku Bank; Mr. Hiroshi Oda, the President of Momiji Bank; Mr. Motohiro Honda, the President of Ehime Bank; Mr. Tsunehisa Obika, Chairman of the Japan Federation of Coastal Shipping Associations; and Mr. Koji Sekimizu, an old friend of Sanwa Dock’s President & CEO Isamu Teranishi and someone who has furthered global maritime administration as IMO’s Honorary Secretary-General.
By aggressively investing in facilities, developing new technologies, and creating new jobs to support “Safe Navigation at Sea” in Japan through ship repair, Sanwa Dock pledges to continue contributing to local community development.
Ceremonies for Sanwa Dock’s honored clients are scheduled to be held at its Kobe and Tokyo offices in November 2017. 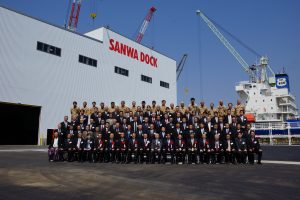